The Little Miss and I had the great honor to attend our church on Sunday and hear the Emeritus Archbishop Desmond Tutu preach. (If you do not know who he is, go here - he is a phenomenal man and received the Nobel Peace Prize in 1984) It was an important moment in church history and his message was so striking that it made the front page of one of South Africa's major newspapers. 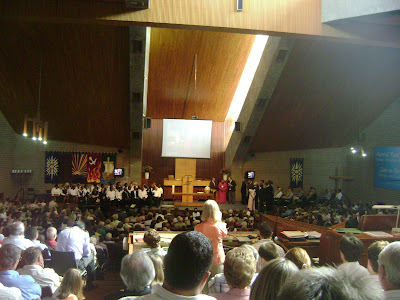 The Arch receiving an Afrikaans encyclopedia. 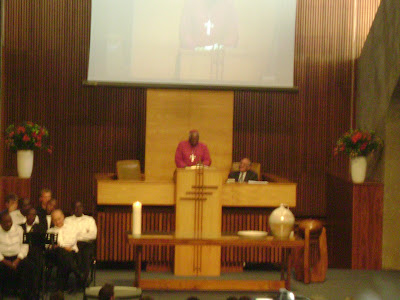 After church we were all invited for tea with the Arch (as he introduced himself to the congregation) but we had dad and the twins waiting at home, so we decided to go home. Then the Little Miss remembered that she dropped a marker in church and back we went to retrieve it. After finding it and taking a short cut through church to another exit, we were stopped by a photographer asking if he can take a picture of The Little Miss, another boy and the Arch. Off course I agreed, and we got to meet the man himself. A big moment for me as I have huge respect for this man of God. He introduced himself as "Oompie Des" to the kids, gave them each a quick blessing " Dear Jesus, please protect this child of yours" and the photos were taken. I whisked out my camera( which I remembered other than the day I met Nelson Mandela and had no camera with me - pre cellphone camera times) and asked the photographer to take a picture with me in it as well. Their picture did not make it to the paper (they used one of him while blessing the congregation), but a great and lucky moment for us.

"Oompie" means Uncle in Afrikaans - it is customary in the Afrikaans and black African communities to call older people that you respect "Uncle" and not just family. 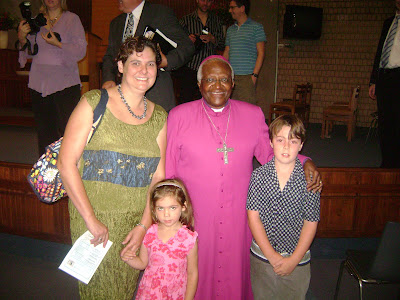 Now, for those who want to know about his message and politics in South Africa, read on. The rest, I will surely not hold it against you if you stop here.

I am not good with politics, in fact I try to ignore it most of the time. But I need to explain a few things for those interested to understand the significance of the above mentioned post. I am not going to go into the very sordid and unhappy past of South Africa ( but I have to mention that not all Afrikaners were racist nationalists), but I am never sure if the rest of the world realize that a miracle happened in South Africa in 1994 - we managed to make a peaceful society (apart from crime) out of the worst of circumstances. With the grace of God. And great men like the Arch.

But the result has been a disillusioned and uninterested white community, especially under Afrikaans speaking people, white and coloured (of mixed race). We have almost no interest in politics as the ANC is so strong that your vote seems to make no difference, your politicians has not influence, your language is not important, you are the wrong colour to have a voice. The ANC has a two thirds majority in parliament which means they can basically do whatever they want to. That coupled with the high crime rate and affirmative action (which had its place but for which the time has really ran out by now) results in many young white (and mostly Afrikaans) highly skilled people leaving the country. Doctors, nurses, architects, IT specialists and teachers for instance. We almost lived in Calgary 3 years ago but decided against it. A lot of our friends have left, our only BIL and SIL works in Dubai.

This year is election year in South Africa and with the forming of a new political party by old ANC stalwarts - COPE, it is possibly the first time in 14 years that the ANC will loose the huge majority they have. As with any democratic country, the sharing of power is ideal and the basis of a democracy - therefore this is excellent news.

But, back to Sunday's sermon. Firstly the Church invited him to pay honor to him and the huge roll he played in South Africa and with the Churches is South Africa. Also for his great role as chairperson of the truth and reconciliation commission.

He read from Psalm 49 and that all the earthly treasures will go in life. He pleaded with the Afrikaner community to stay in South Africa, as the country needed us, to raise our voices against affirmative action, as he is doing, and to stay committed and involved in our country and politics. He did this all in Afrikaans, and blessed the congregation in Xhosa, while the scriptures was read in English. He is still building on his rainbow nation. And yes, it was needed. Maybe it will help to keep some more Afrikaners in South Africa.

I fyou have any questions, please leeve a comment and I will try to answer as best I can.
Posted by cat at 09:11

Email ThisBlogThis!Share to TwitterShare to FacebookShare to Pinterest
Labels: A, South Africa