So we get to review stuff

The friendly people at Fruit Pack recently asked if the Jugglingact kids would review their product. As per usual I promise a honest review and will not compromise just because we got some stuff for free. But we always do get excited over free stuff, hence the kids all had one for desert that very same night. 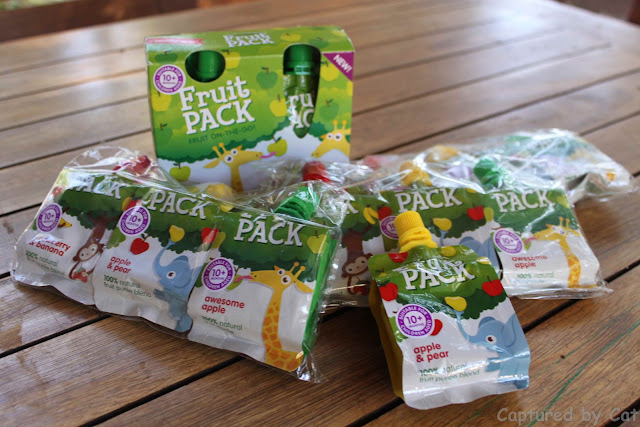 The reactions were mixed - L took one sip and gave me the sachet - I do think it might have been a bit new to him - he is our pickiest eater. C had about half and then gave it to me and the Princess downed hers and the other 2's leftovers. So say a 1 and a half out of 3. The Princess liking this was a huge plus for me as she is a total summer fruit eater and apart from oranges, the all  year round fruits of bananas and apples are just not her favorites. She would rather eat a sweet pepper or baby tomato. So in some went into her lunchbox and apparently caused a bit of a stir in her class - I got a few messages from moms asking about the "fruit sweets" she had in her lunchbox. I was happy to refer them to Spar, Dischem and Babycity.

However I decided to give the packs another try during our Saturday mid morning snack , which is often a fruit snack. With a totally different result - a raving 3 out of 3 from all the Jugglingact kids. Everyone had theirs and L asked for another so it seems try one was a semi fail possibly to full tummies and tiredness. Funny enough, their choice of flavours differ - the Princess loves the strawberry and banana flavour (both fruits which she does not particularly enjoy on their own) and the boys love the other two (apple and apple and pear). As to myself, let's just say I would rather eat the fruit.


What I do love about them though most of all is that it is so convenient for school lunch boxes - they seal easily, can not be squashed to pieces ,do not mess and at least we get that much needed fruit inside their tummies. One problem though, none of them can open it themselves - not even my 7 year old. She has to ask a teacher to break the seal for her. So Fruit pack, my only point of critique is the caps, which I do understand must have a hygiene seal, but is possibly just too tight.

Do try Food Pack for yourself - from age 10 months and up. And I do think the apple flavour could go very nice with and Eisbein on the side!
Posted by cat at 12:31