Competition in our 0/10 girls age group for the swim squad is hectic. With 1 girl already competing in the 0/11 national championships last year (at 0/9), and several other girls representing some of the best clubs around the chance of getting into the squad is very little. In fact, some of the girls bluntly state that they do not even want to compete. Our A had the same attitude - in fact, she did not even want to try because as she states, the places are all taken. And she believes she is not much of a swimmer - she is slow. What's the use? She did however swim in a small foundation base gala at the end of the year - but it was just the kids and not places/teams involved. It was sort of a mass thing - they all had fun. Not the real deal thing.

We as parents always hold the stance that if given the chance, would should just try - and try your best. For us, your best is good enough - it's great! So this year with their Inter house gala in January we urged her to try. Her swim coach asked her to do just one race for him - with the idea just to get the feel of competing. Gosh, she was all fired up but come race day, she was in tears. She just did not want to. I talked, I reminded, she reminded me that she actually can not despite me knowing she can. She then made a deal with me - she would do the one race her coach asked for. She chose breast stroke. 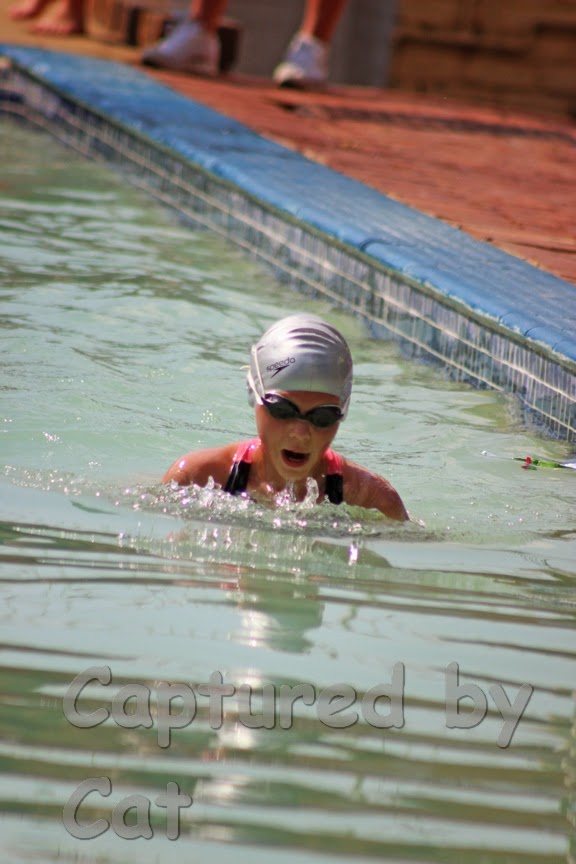 Very nervous she dived in a had a great race and came 4th in her heat - what we did not realize was that her time was good for her age. In fact, apparently they have 12 girls in her age group with good enough times to do well in school galas. After the race I tried to encourage her to do backstroke to but alas, to no end. She stated that she did what we expected and enjoyed it but that's it. We were regardless extremely proud of the fact that she tried and gave her best.

On Monday I came home to a very excited girl with a call up letter to swim gala for the school on Friday. It was a friendly and she was given the chance to compete. On Friday in front of my eyes she turned from "I can not do this" to " I can and want to do this". Gosh did she enjoy representing the school. She got a 5th in her race and swam beautifully and their mixed medley team won their race, despite a goggle failure for her. The best of all is she enjoyed it so much! She literally bubbled over with enthusiasm. It was huge fun. And she wants to do it again.

I am thankful the school has the foresight to give all of them the chance. She is a little sad because she realizes that it was possible her turn this season (there are only 6 galas) but we intend on using it as inspiration to work on her swimming. What a wonderful experience for me. Oh to see her fly!
Posted by cat at 14:50