This year I initially planned to just make cupcakes for the boys' birthday party. I will tell you more about the party later but it boiled down to getting home after the activity and having a quick candles to blow out and the guests then leaving for home. However we tried to keep things simple and easy this year (and honestly it was) so I looked into buying cupcakes in stead of baking them. Then we had a heatwave and the boys asked for ice cream after the party and the idea of an ice cream cake was born.

I have only once before had an ice cream cake for a party - for A's third when the boys were tiny little 3 month olds. I then bought it from a well known chain retailer. When I looked into doing that again I realized they had no more shops in Pretoria - yes there was one in Centurion and one in Montana but that sort of defies keeping things simple - to drive far on Saturday morning to get a cake. So I asked on Facebook and a place in the far east of Pretoria was mentioned over and over. Then a mom from school called me to say that Royal Danish - they of the wonderful hand made exquisite ice cream - make birthday cakes that will not break the bank. And they are an easy 10 minute drive from home.

The long and the short is that I went there, tasted and tasted and in conjunction with the boys decided on a Peppermint crisp and Bar one ice cream cake. I emailed an image which they printed on rice paper and put on top of the cake.  (I blacked out the boys' real names) They piping around is made of white chocolate. For R250 for a round 28cm cake! Excellent price. 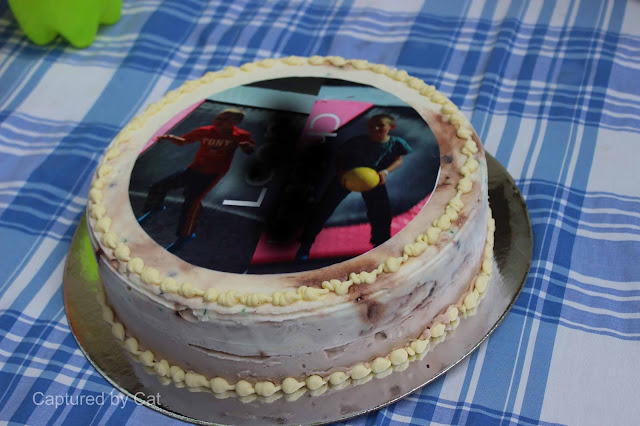 I find it hard to describe the awesomeness of this cake (or their ice cream in total actually). The Peppermint crisp layer apart from being flavoured as Peppermint crisp had realy bits of it and plenty of it too. The same with the Bar one layer. You can actually see the bits of yummy on the picture below. 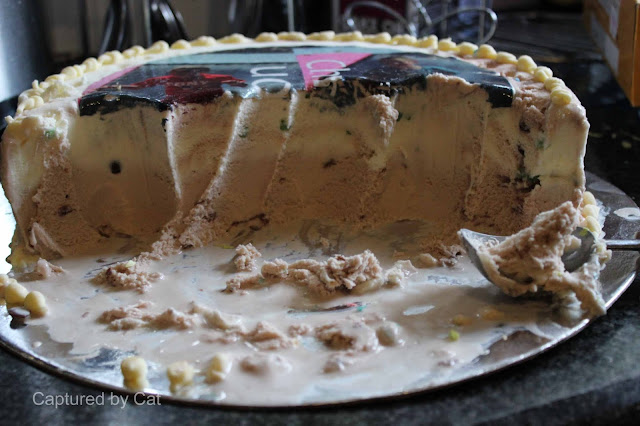 I love that we supported a small local business. And what I love most is that not a tiny bit was left of the cake - all enjoyed and eaten. No waste like those half plates of cake you find lying around after parties or half a cake not eaten. I dished the ice cream in cones and some kids had 3! Every single parent that picked up a kid had some and maybe second. It was a huge hit and by far the tastiest cake we have ever had for a birthday.

(Disclaimer - they have no idea that I am writing this and we payed and ordered our cake like any other customer. This is part of my "public service announcements" where I love to give a shoutout to good service or products.)
Posted by cat at 13:30