Way back and wordful Whensday - the story of us, part 4.

Playing along on a Wednesday (as per usual) with Cheryl at Twinfatuation and Angie at 7 Clown Circus:

Today is literally a mouthful - so if you do not want to read a looong story, just check out the pictures.

It feels like yesterday. Early on New years morning 2003 Hunter woke me up with a kiss and the words: "Are we going to have a baby this year? " I literally had to think about closing my mouth not to look like an idiot - after all we did not plan on having children. Where did this come from? Hunter carefully explained that yes, he had second thoughts and yes, he can hear my biological clock ticking loud and clear. So I begged for a years grace to adjust my mindset, and he agreed. I also stated that if we then have children, I want 2 and not 1 - I was not going to repeat the only child pattern that I was born into.

By December I reluctantly agreed that we should give a try, but the mole on my eyelid (that has been there since birth) suddenly started to grow and it had to be removed in a delicate operation in February where a third of my eyelid was removed. By March I was off birth protection and we were ready to go. I paid my obs/gynea (The now famous around here, Dr Barbie - pregnant herself at the time) a visit to check out if everything was ok and her recommendation was that taking into account my age and previous problems, we try only 6 months on our own and then return to her to discuss other options. As I was leaving her office she asked me if I was excited about starting our family and I answered that I was still not sure if I was ready for this. With a small smile on her lips she replied that maybe she will see me sooner than later. She told me a few months on that her experience shows that the more relaxed you are about conceiving the easier it happens.

My disappointment at not conceiving the first month was not big, but it fell on the Sunday of sweet Emma's christening, and in church I started to feel teary. Holding her sleeping little baby body later at the braai after, spoke straight to my heart and I just suddenly knew that yes, I was indeed ready.

Three weeks later I had a bladder infection that drove me nuts - my back was sore, everything was niggly. But I was scared to try over the counter drugs for in case I was pregnant so I went to see my friendly GP who took one look at me and decided to do two urine tests - one for infection and a pregnancy test. Guess which one was positive! Hunter still tease me today about our 4 year old bladder infection. We did the blood work and I made my 6 week appointment at my obs/gynea. I did not say a word to Hunter but bought tiny little shoes and wrapped it up. I took him out to our local steakhouse that evening and handed him the gift, which left him speechless and extremely emotional. And we were pregnant - a very early show on the test.

One week later at 4 weeks the nausea started. I was miserable and hiding the pregnancy until we had our 6 week scan - when we were advised by my straight talking obs/gynea that our chances of miscarriage was 1 in 2 . I was 35 at the time and this was considered a high risk pregnancy so we kept the news from all , but at 12 weeks everything was in order. We told the family, friends and collegues at work.

The pregnancy was a tough one - I had no major problems at the onset , but every single pregnancy niggle you can imagine (I was spared heartburn). I lost 2 kg (4.4 pounds) in my first trimester because of the nausea - I was not only feeling nauseous, I was puking, 24 hours of the day and no medicine helped. At all. At 20 weeks, it was as if a switch flicked - the one day I was nauseous, the next, I was fine. I wore my ordinary jeans for the last time at 20 weeks.I was convinced I was carrying a boy - Hunter and his dad was so sure it was a girl.

Then the swelling started - my feet, hands etc - by 24 weeks I had Carpal tunnel syndrome and I could hardly write but some supplements greatly eased this. We also at last saw that we were expecting a girl - up to now she was lying with he umbilical cord between the legs. Then my sciatic nerve in my left leg went crazy and I could hardly walk - the Little Miss was lying with her feet wedged in left hand bottom side on the nerve. I absolutely craved everything sweet and one lunch time ate half a watermelon! By this time my obs/gynea's baby was born and she was back at her office - tiny, at 28 weeks but healthy, and what I did not know at the time, was that she expected twins and lost the boy a week before the girl was born.

By 26 weeks the protein levels in my urine was double the normal, but my blood pressure was low, very low. I had the first of 5 complete urine screens - where all the urine in 24 hours are collected, tested and correlated by two blood tests 24 hours after the other - each and every time a horrible experience. By 34 weeks (2 days before my birthday) the protein levels were completely off the charts and although my blood pressure was still very low, I was treated as having suspected pre-eclampsya. I was told to pack my bags and be ready to go to hospital at any time. I was given steroid injections to mature her lungs and really got very emotional about delivering this baby early. She was already 2 kg at the stage so my obs/gynea went through the NICU discussions and possible outcomes with me. This is the type of thing I most appreciate about her - she is straight up and inform you of all, while staying sympathetic.

I was ordered to take it slow, although bed rest was not necessary, and was given a blood pressure meter and urine tests. We were now heading into our long December holiday and my obs/gynea's office was closed apart from scheduled appointments for the pregnant girls. I had to text her my results every two days and she was so supportive - she twice came to her office just to see me and even went to a Doppler scan with me to check if everything was ok. By now my hope of a natural birth was dashed - she was lying with her head firmly lodged under my right ribcage and her feet in my left hand side and she was big! The doctor tried to turn her, but no luck. Adding to that was the suspected pre -eclampsya, which sometimes shoots the blood pressure sky high (and mom into a coma) when labour starts. I had to get my head around a C-section - not at all what I planned. At my 37 week appointment the doctor decided not to tempt fate and the pre-eclampsya any longer and scheduled the C-section on the day we were 38 weeks.

At 6 am on 11 January 2005 I was admitted to the hospital - the C section was scheduled for 13:00 and all was pleasant and very relaxed. Monitors were attached and we were left for half an hour for the observations to run. A very surprised nurse came back to ask me if I was not in pain. The relaxed atmosphere became very tense and people were flying in and out of the room. I was having contractions every 10 minutes and not feeling a thing - I was in labour and everyone was worried that my blood pressure will shoot up at any minute. I tried my luck one last time and asked for a natural birth but the labour was stopped with medication and my obs/gynea informed that I was in labour. All systems jumped into place to get the team ready earlier, and at 12:32 am our princess was born. It was not an easy C-section - she was lodged so tightly under my ribs and I started to panic, but in the end all turned out well. Her APGAR was 8 as she had a blue tip tip her left ear, but she weighed 3,45 kg and was 50 cm long. We named her Ann*ecke - both her grannies are called Anna, so it was an easy choice. 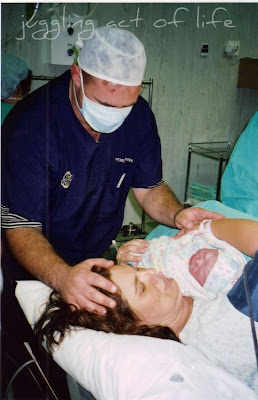 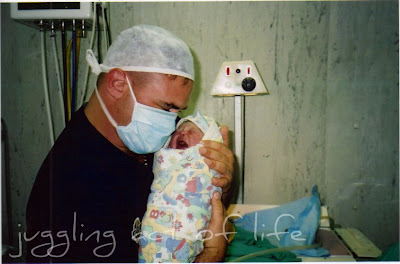 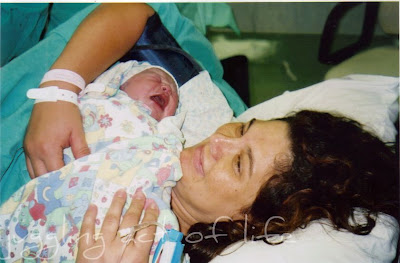 Off course, it is difficult to express my totally overwhelmed feelings at the time, but we were both in absolute awe of this tiny person. Hunter held her in theatre and insisted on carrying her himself to our room. When they wheeled me in (I had a small drama in recovery - after effect from low blood pressure and the spinal), they were quietly cuddling in a chair. My love for my special hubby at that instant took another giant leap. 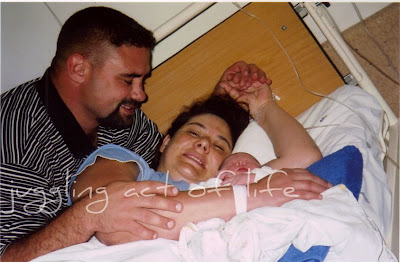 We had the normal first time breastfeeding issues, but I held strong and not a drop of formula passed her lips. She was severely jaundiced ( Hunter and I have clashing blood type problem) and we had to stay behind in the children's ward for another 2 days after we would have been released, but from there on she has been the healthiest baby and child I know. She slept a 5 hour period from her very first night and the paediatrician gave me permission to leave her to sleep for that long as she was so big and healthy. She started sleeping through at 12 weeks and has never stopped. We had a little run- in with early evening colic from moths 3 to 4, but once that was sorted out, it was basically easy going. Our little girl - what a joy! For the moment our family was complete. 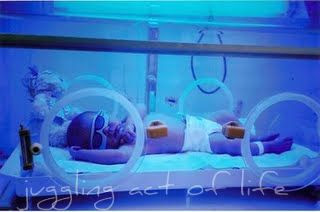 Email ThisBlogThis!Share to TwitterShare to FacebookShare to Pinterest
Labels: A, birth, breastfeeding, pregnancy, The story of us, Way back WHEN- sday; wordful wednesday