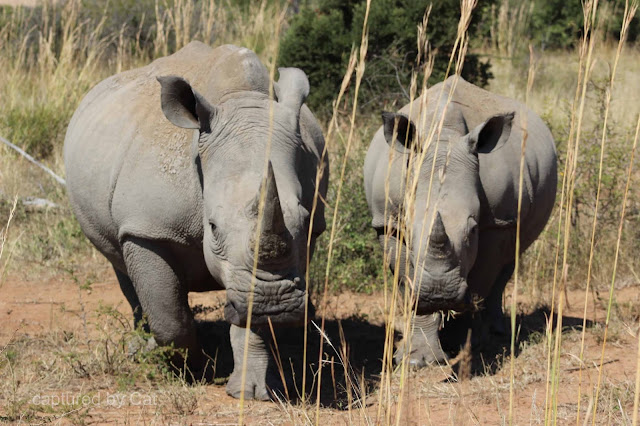 I have written so many times about rhinos and the fight for their survival. Today is another reminder that however small our contributions every bit helps. Every year we loose more and more of these wonderful creatures. And easy way to contribute - go to Stop rhino poaching.

Did you know that rhinos?
1.  have poor eyesight, but very well-developed senses of olfaction (smell) and hearing.
2.  are the second largest land mammal.
3.  skin maybe thick but it can be quite sensitive to sunburns and insect bites which is why they like wallow so much – when the mud dries it acts as protection from the sunburns and insects.

When last have you seen a rhino in the wild? Do you want your grandchildren to have the same privilege?

For those who want to wear the message - Keedo has awesome Rhino T'shirt for the smaller boys and we found this at Mr Price sport for the girls.
http://www.mrpsport.com/en_za/jump/GIRLS/Rhino-Print-T-shirt/productDetail/7_3850710045/cat1240052/general
Posted by cat at 14:22