When I started thinking about celebrating the boys' birthdays at school I had a Whatsapp chat with both teachers. From grade 1 on there is not much time to celebrate and they basically sing, eat a cupcake and that's the end of it. I asked them if I should bring just cupcakes or a bit of sweets and a cupcake. The one replied that just a cupcake please (limit the sugar) and the other said that I could just as well leave the cupcakes because the kids are so tired of cupcakes they throw away half of them - and just send some sweeties. I then asked the first teacher specifically about cupcakes and got the same sort of reply. Then I suggested ice cream and both teachers replied extremely positive. 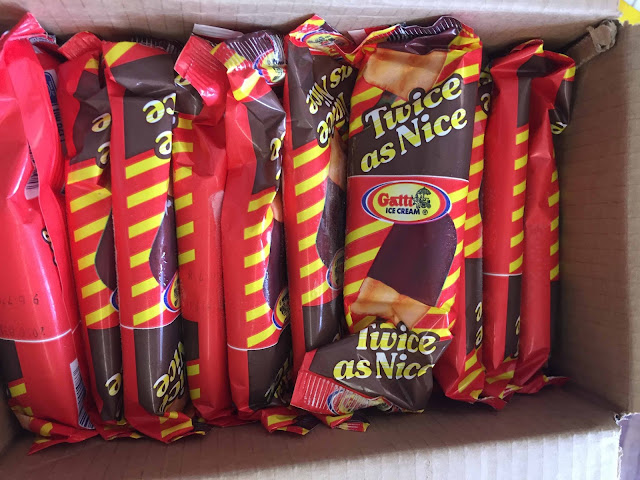 Boy were the ice creams a hit! It is a hot and rather casual day just before the long weekend so it went down really well. Add to it that the kids are wearing Springbok attire today to and you have a  very festive little event. I was lucky that both teachers immediately asked me what timing I would prefer, knowing that there is another twin in another class that has a celebration too. So I could be with both as their friends sang to them and they handed out the ice creams. Even the headmaster got one as he walked past where Mr C's class was busy celebrating.

It was by far the easiest (and I may add rather cost effective as I bought it at the factory shop) festivity in a while.

So what do you do about school celebrations?
Posted by cat at 14:35