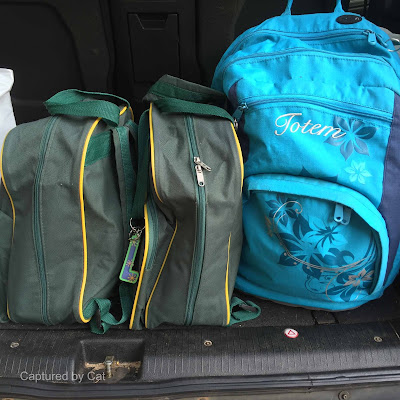 A was hugely excited last night about seeing her friends again and starting all the exciting new things - she mentioned that they study Egypt in grade 5 and she can not wait. And that they are going to make bricks, and and. She even packed all 3 lunch boxes last night - I hope this trend continues. This morning she was a bit less enthusiastic (there were even a few tears involved - once because she hit her head on the car back tail door) but as I bumped into her after leaving C she was happy and giggling with her friends. Hugs and happy laughs.

L was a very happy chappy until the milling of a lot of kids and parents had him a bit withdrawn - only until they were called to order into lines and then his world was happy again. He very independently took his bags, walked to his class and said a very quick goodbye as they walked into the class - giving his new teacher a hug as he passed her in the line.

C was just the happiest camper ever - as we walked into the gate he met his friend A and off they went after a quick goodbye. As I left L I went to the area where the grade 3 were being sorted into their classes and a very happy boy waved to me. As his class was called out just after that he had a huge grin on his face as he and one of his best buds walked to their class - happy that they are together again this year. 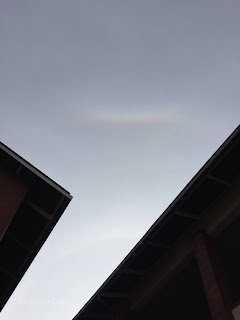 As I said goodbye to A one of her friends shouted - "there's a rainbow" - and there it was, tiny, with no rain insight - a little wonder of nature right there above our heads. I believe we will have a rainbow year this year. Roll on 2016 and grade 2, 3 and 5 -with all that school and activities bring - you are going to be a great one!