I will never forget Dr Barbie's words: "Do you see what I am seeing?". I did, and started giggling uncontrollably. Hunter kept asking: "What are you seeing" and she kept saying: "Calm down girl!" She turned around to face him and said: "There's two!" I saw the absolute shock on his face and the next moment he grabbed the examining table I was on and almost fell down. We just looked at each other in absolute wonder and shock as the doctor fetched a chair for him. We were 12 weeks pregnant with our long awaited second baby, confirmed to be a singleton at 6 weeks. She proceeded to find two healthy heart beats and our world changed in seconds. 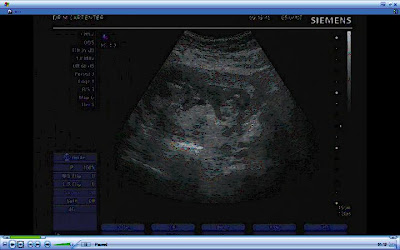 You see, we almost did not have a second pregnancy at all. After The Little Miss' birth my urine levels were still completely off the charts and my obs/gynea referred me to a Nephrologist who established that I was born with hyper filtrating kidneys and that I almost had kidney failure with her pregnancy. We were advised that a second pregnancy is possible, during which he will also monitor my kidneys. He also sternly advised that under no circumstances will I be able to carry a multiple pregnancy. After trying for 3 months to fall pregnant the second time around tests showed that I was pre-menopausal at 37! We were diagnosed with secondary infertility. It was a huge shock and even more so the news that apart from monitoring my ovulation or a single embryo IVF there were no other options due to the kidney issue. At a very low success rate the IVF was not an option, and as we kept comforting ourselves, we did have a healthy child, more than a lot of other couples with fertility problems. I really wanted a little boy and after discussions with Dr Barbie she gave me some information about the Shettles method - saying that it can not guarantee a boy, but can certainly increase our chances and since I had to check my ovulation in any event, we could just as well try it. I also started, very arrogantly to pray for a boy specifically.

For 8 more months I never ovulated and one day, just suddenly, 2 pink lines! I almost died of shock - I ovulated. I did my Shettles timing calculation and can you believe it, only 3weeks later I had a positive pregnancy test!

Back to the day that we found out we ere having twins...We have planned to spend the day with the in-laws at the Pretoria zoo and we went ahead with our plans. I spend quite a bit of time on my mobile though, getting appointments confirmed on the sly. I was referred to a maternal fetal specialist as my pregnancy was classified as "very high risk"and had to see him within the next week for the triple screen test. I also had to get to the nephrologist asap. That evening with a braai at our home, we told the 3 grandparents that they will become 2 grandchildren richer. The tears of joy literally flowed. That night at about midnight, my tears started to flow. I was in shock! I could not stop crying. Hunter tried to console me. But I was devastated. The only thing I could think of was losing the babies, or worse, dying and losing them with kidney failure. Or having very small very premature disabled children. And the house not being big enough, the car not being big enough, the financial strain, will I be able to continue working?

Hunter did the only sensible thing first thing in the morning - he phoned my BFF Hesti (mom of twins) and asked if I could come over. He did not explain a thing - I heard the phone conversation. When she opened the door she said:" You are expecting twins!" and I started to cry again. She says that she just knew - she always knew I would have twins and was so surprised when The Little Miss was a singleton. I explained my worries to her and her husband, who is a minister, and after a lot of talking their family laid their hands on me and prayed for us. They specifically prayed for a long and healthy twin pregnancy. And the biggest act of trust in my life started. I put my babies and my health in God's hands and blindly started to believe in a positive outcome. To believe that God had promised these two little people to us. 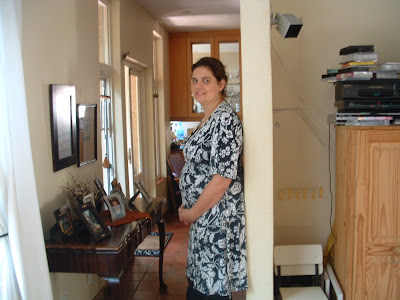 At 14 and a half weeks - check out the tummy!
Returning to work on the Tuesday after Easter, I drew this verse from my "Daily bread" cards:
Acts 30:5 :Every word of God is pure: He is a shield unto them that put their trust in him. I kept these words as my encouragement for the pregnancy.

Email ThisBlogThis!Share to TwitterShare to FacebookShare to Pinterest
Labels: pregnancy, The story of us, twins, Two for Twosday