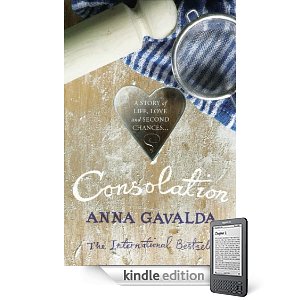 I have to admit that sometimes, the cover of a book is the first draw card for me. This was certainly the case with this book with such a lovely cover.

Charles is a life-tired architect, frustrated in his work and life at home. In fact, his only bit of positive feedback and the light of his life is a teenager that is not even his own child. Charles also has a colourful past, dominated by his down to the rules parents , a unique neighbour , her son and a rather unconventional nanny. And although in secret, Charles loved that neighbour, Anouk, not like a son but like the man he was yet to become.

When he receives the news that she has died, his life all of a sudden goes into an out of control spin until, inevitably, he sets out to find her son. There life hands him the best consolation prize ever - Kate, a woman Anouk touched with her unique light. And a woman that will heal his heart.

I found the first half of the book a rather tough read - maybe due to the translation from the original French. But once you reach the last half it turns into pure magic.

Email ThisBlogThis!Share to TwitterShare to FacebookShare to Pinterest
Labels: 9/10, Anna Gavalda, book 10, may 2011