The story of the white tekkies*

Some of you may know that our school has a "no shoes" policy in summer for grade 1 and 2 - in fact a lot of kids just never wear shoes in summer until about grade 6 or 7.  Winter shoes are white tekkies (or predominantly white) with tracksuits - a very comfortable and warm option. We have always bought the kids either good quality tekkies or then Mr Price Sport has nice solid white ones for a good price. When A was in grade 1 most tekkies in Sportsmans warehouse were mostly white - they could have a colour stripe here or there, but they were white. Nowaday tekkies are grey or black with colours - not white. We have also bought tekkies relatively early in the year every year and has for the last found the Mr Price ones with no problem. For Mr C we bought a pair of white court shoes as he plays tennis that served for his school shoes too. 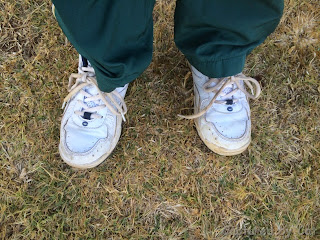 So I discovered a few weeks ago that Mr C was wearing his sister's too small tekkies. Turns out he has outgrown his ones but discovered that her old ones fit comfortably and just wore them without pointing it out to me. This is all great and dandy as I love that we are able to pass some items down, apart that one of the seams on the top of the right hand shoe is loose and actually looks a tad, well, handed down too much. So the search started for white tekkies.

We had a bit of bad luck on our side - too busy weekend days and such. One Sunday afternoon they closed the door in front of our noses - just too late. After 3 branches of Mr Price sport, 3 branches of Woolworths (that also stock white tekkies with laces - yes, the velcro is out if they play tennis) , 2 branches of tekkie town and 1 branch of Sportsmans warehouse (I refuse to pay R700 for tekkies he will outgrow in a year) I had it. I even tried to buy a pair online from Mr Price Sport to no result - they did not have no1 online. I could have bought hundreds of grey or coloured tekkies, even black - but nope, no white. I could even have bought several pairs of white ones with velcro.  Or the pair of two left feet no 1 white tekkies at Mr Price sport Atterbury. But none would have worked for the school.

After a search of weeks (I am not kidding) and mr C wearing his sisters' old tekkies I almost kissed a salesman at Sportsmans warehouse when he found me (and another mom from our school I bumped into) one size 1 and one size 2 Hi tech court shoes for a good R180 more expensive than the Mr Price ones. But shoes we have. And Mr C had to take the no 2 as her daughters' feet were smaller.

I know that a lot of schools have the same shoe policy for winter - mostly white tekkies. Now why oh why do they not stock more white tekkies if this is an issue for all. The other mom had the same story I have and according to the moms at school everyone has a problem with this. Certainly if there is a market one would think the retailers would notice? If beginning of May no white tekkies with laces can be found it surely is an indication. From now on my kids will get new school tekkies in March if there is even the slightest possibility that you  will outgrown them before the winter is over. I am NOT doing this again, ever. Mom has spoken!
Posted by cat at 13:33