We had a death in the office family this morning. Trusty Frankie, named after the great architect Frank Lloyd Wright, passed away this morning early. The funeral was a solemn but brief affair in the ladies bathroom. He leaves his trusty friend Corbi (named after another architectural great Le Corbusier) behind and a office full of friends. (yes, go Wiki those names and learn something) 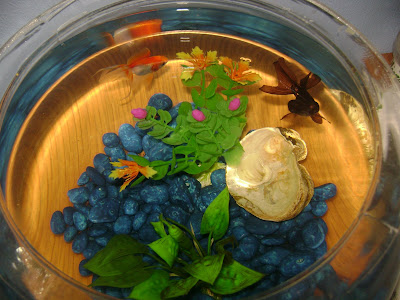 Corbi in orange, Frankie in black.

Did I mention before that we have a relatively pet friendly office policy? Baby puppy M spent about her first week in the office, so has several other varied types of puppies and kittens. Also 2 corn snakes (only one day - I almost died and refused outright to come to work if they came again), 3 parrots (as babies) and now, a budgie - which is driving me bonkers! It is my secretary's baby bird that she is hand rearing but the freaking thing sounds like a slipping fan-belt as it screams my ears off at feeding time. 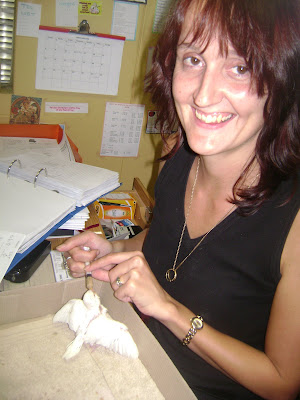 Gosh, I hope it grows big enough soon to retire to it's own home. Have to go now - to buy a new fish and find some peace and quiet.

Oh yes, and I will schedule this to post tomorrow - Blogger lost my long answer post I wrote last night which was meant for Saturday. Bugger!
Posted by cat at 11:19