When plain hard work (and maybe a bit of talent) pays off. 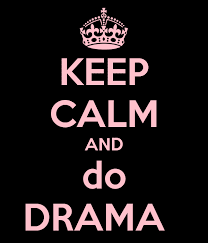 A has always enjoyed drama. This year though the prepared drama has taken more time and determination than ever had before. You see, the group she has been in has always had a relatively easy ride. And did well - always an A+ when it comes to Eistedfodd time. She and her one partner even scored and A++ in unprepared drama last year . Their groups however are determined by the days when they take drama. And so this year she landed in a new group - with only one of the girls that was in her previous group. The rest of the group was made up of one girl that has been in one of the other good groups and two brand new girls with zero experience.

All along the girls have been prepared to maybe not score as high as their previous years because by grade 4 a bit of drama experience makes a difference. But they have a great teacher and she handed out the roles according to personality and experience. They were well on their way. And then a glitch. One of the new girls did not as expected in her term 2 exams and her mom stopped her drama. Literally less than 7 weeks before the Eistedfodd with the whole piece in place and rehearsed. They were just going to run it through every week and work on unprepared preparation and coaching.

So the result was a whole restructuring of the piece - with one less character. Drama most weeks twice a week and the last month 3 times a week. I was very angry with the mom on the one hand but I do understand her reasons. But drama is a team sport and honestly you do not drop your team.

Friday was Eistedfodd day and despite it all they were amazing and scored an A++. Highest achievement ever! We were so proud of the four of them. Little drama queens.

Once again I am so happy that the lesson of hard work equals reward could be taught. Also the lesson of adapting and accepting the unexpected bad news. And most of all that team work wins. I am wondering what the other mom is thinking when she saw their marks on Facebook?

So now my question - what would you have done if you were the mom of the other girl? (She is no where close to failing but the marks are not what the parents wanted). Would you have dropped the team or would you have continued with what would have been one hour a week and maybe half an hour once a week for a month and caught up the time and work somewhere else? I know it is more an issue of principle possibly. However the principle of teamwork is also one to stick by. Due to the positive outcome I am not angry but it did add a lot of strain on the other girls in a term where we certainly do not need more strain.
Posted by cat at 10:21