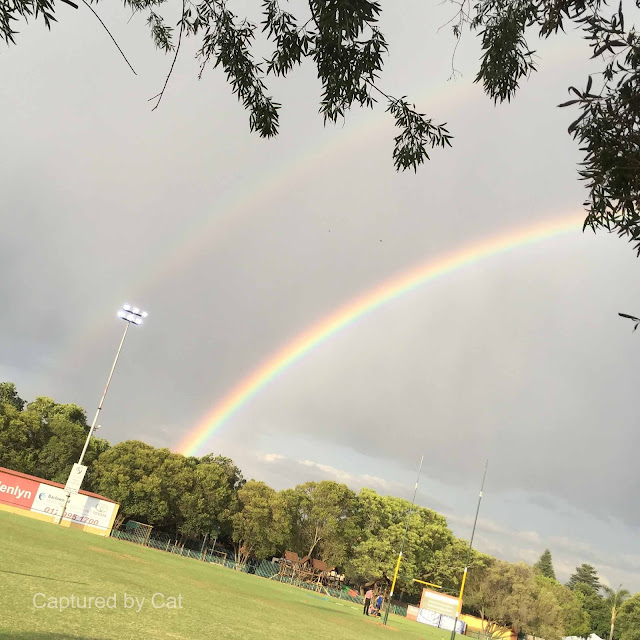 Is best described by this photo - beautiful twin rainbows against a dark and cloudy sky - and threatening storm that never happened.

It has been two weeks of incredible highlights but seriously busy. Exhaustively busy. A wrote her first end of the year exams and what I expected to be the storm that never happened. She studied well ahead (on our prompting) and coped well with the fact that despite her exams we spent a lot of time on the side of the cricket pitch - as C played his first school premier league. L very patiently enjoyed watching the matches (the grade 1 do not play this league) The Premier league is a fun league based on the concept of the Indian Premier league with fun names and coloured  caps to distinguish the teams. Two grades are combined to play with captains as leaders (no coaches) and the team spirit is truly something to experience. The grade 7-4 play before the exam season but the grade 2 and 3 league is during the senior phase exams and serves as a step up tool for the grade 2 boys to move from Bev (mini) cricket to the full size version of the game. With 4 matches per team in the group stage and a possible semi final and final it is a lot of cricket to cram into two weeks. C and the Blue Warriors made it to the semi finals and the third place. They were disappointed but a bronze medal is nothing to be shy about too.

We also had two prize givings, two school grade parties and two class parties. Lots of happy, lots of busy. And I am not even mentioning work that is always busy this time of the year. I will tell you about the prize givings later - simply because I feel they deserve their own posts. But suffice to say I have a permanent smile on my face at the moment.

This weekend we have a few commitments but we are planning to rest up a bit, to go a bit slower. So how has your week been?